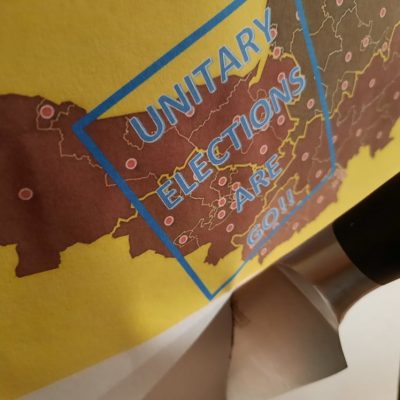 Somerset’s new Unitary Authority now has a date for its first elections.  Thursday May 5th 2022 will see not only the elections for the new ‘One Somerset’ county unitary council, elected on the current county divisions but with 2 members each instead of 1 , but also Town & Parish elections, again elected on existing boundaries. Leader of Sedgemoor Labour group & Bridgwater Town Council, Cllr Brian Smedley (Labour, Bridgwater Westover) said “With the new ‘all powerful’ Unitary system people will be electing paid councillors with greater powers than ever before. We believe, however, that these will be too remote and the county is far too big to sustain localism in such a system. However, we have to engage with it otherwise people will be unrepresented. And a positive development is the fact that Towns and Parishes powers are also likely to be increased as the ’District’ layer of local government will be abolished. This gives us the opportunity to step up and take back control of our communities. Here in Bridgwater, Labour runs the Town Council and with more powers rescued from the outgoing Sedgemoor that we can stop falling into the hands of the County Unitary, we can regain a proper level of local government for us and really change the fortunes of our town. This could be reflected across the county and is the one glimmer of light in this new system which no-one asked for and so naturally the government has thrust upon us.”

END_OF_DOCUMENT_TOKEN_TO_BE_REPLACED

On Wednesday 20th January, Labour members across Somerset will have the chance to question Labour MP Clive Lewis on a Zoom conference organised by Bridgwater and West Somerset CLP.

Clive was born in London, and grew up on a council estate in Northampton. He attended a local comprehensive, becoming the first member of his family to attend university. He read economics at the University of Bradford before being elected student union president; and eventually Vice President of the National Union of Students (NUS).

Clive is a strong supporter of a fully funded public, not private, NHS and stands for decent, secure, properly paid jobs; an economy that works for all of us, not just a few and where the wealthy pay their way and has campaigned in his Norwich Constituency against the privatisation of local NHS services, He has been at the centre of a broad coalition of trade unions, faith groups, businesses and academics working for a Living Wage across the city; and has worked with local campaign groups and trade unions for public ownership of the failing privatised rail industry.

Clive says “I’m not your typical politician. My life outside of politics has given me experience of the real world. For more than a decade I was a BBC TV news reporter, eventually becoming the BBC eastern region’s chief political reporter. After that I worked as a BBC technician. I’ve also been an army reservist infantry officer, serving a tour of duty in Afghanistan in 2009. I’m also an associate school governor  and have worked with schools and charities to help some of our city’s most disadvantaged children. I was also one of the last Labour Government’s National Black Role Models – working with young people across the UK.”

The conversation will be chaired by Bridgwater Town Council Labour Leader Brian Smedley and will start at 7pm. 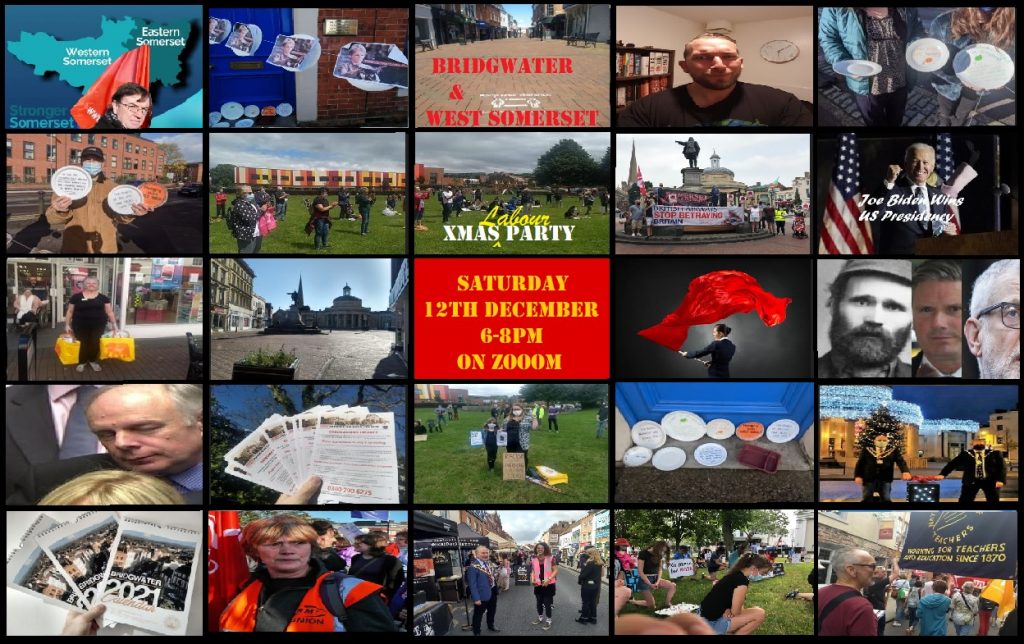 On Saturday 12th December we’ll be having a Bridgwater & West Somerset Labour Party Christmas Party….yes yes yes on Zoom, yes, but everything’s on bloody zoom. So please do join us. The link is below and the plan is you just turn up and watch, take part or just leave it on in the background and watch your own telly. Also, there’s free food and drink. That’s if you want to provide it for yourself in your own home. And probably best plan if you want to survive this.

Well, you log in at 6pm Saturday 12 Dec and we’ll be playing a selection of music..in fact YOUR music…but what you have to do is write to us in advance at somersetlabour@gmail.com with a youtube link to your favourite (short) piece of music (no ‘1812 Overtures’ etc) and then on the saturday , turn up and say a few words about why the song means something to you and then we’ll play it. A kind of DESERT ISLAND SOCIALISTS. Except , this time you’re stuck on a desert island with 100 other socialists. Aaaarghghh!! Hours of fun agreeing which one is the biggest class traitor!

Also, we’ll be having a FILM QUIZ because we have prizes to give away. Film prizes. In fact free tickets to the Lockdown Cinemas new streaming of ‘the Big Meeting’. (preview)

Then there’ll be a SPECIAL (secret) GUEST. (Secret because he hasn’t confirmed yet and so he might be even secreter..or different….)

At tonight’s Annual General Meeting of the Bridgwater and West Somerset Constituency Labour Party LIAM TUCKER was elected as the new chairman. Other officers are listed below.

The long awaited Labour Party NEC results have just been released. The crucial CLP section sees 5 of the 6 leftist Grassroots Labour slate elected  and 3 of the 6 Rightist ‘Labour to Win’ slate on the new NEC. Centrist Ann Black from ‘Open Labour’ makes up the 9. None of the independents were successful. Turnout was 27%, but 19% in the youth section.

END_OF_DOCUMENT_TOKEN_TO_BE_REPLACED

We have been given the go ahead to select candidates for the remaining seats in the project MAY elections for Somerset County Council.

We will select these on evening of February 11th.

We have some members who wish to be considered for these seats BUT we need more candidates and so this is to emphasize to you that YOU can put your name forward. To do this you can send the application form to Regional Office (megan_lambert@labour.org.uk) but to help us can you also copy our CLP secretary in (bdsmedley@gmail.com) .

Please do this during the forthcoming week and indicate which seat (or seats)  you are interested in standing for.

There will then be selection meetings when you will be interviewed and considered along with other candidates and then chosen by vote of the local ward labour membership.

Following the next 2 selections (Bridgwater East and North are seats which we don’t hold at the moment but which we have held in the past and so are priority seats) we will then move to the next list of seats-some of which are harder to win BUT we would want people to have the chance to  vote Labour in those seats so having a good local candidate would be our priority but also having someone simply to fly the flag is also important. Please get in touch.

If you have submitted the application form and been accepted you will be on the ‘panel of candidates’. Each ward can pick from the panel of candidates to interview from on the given date and then votes by secret ballor which one they would like for their candidate.

Selection meetings will be held on Zoom.

Following the selection of candidates for these 2 seats there will be further selections for the next tranche of seats. in this order but on a date tbc.

Ballots for this year’s elections to the Labour Party’s National Executive Committee (NEC) are now out and voting will continue until 12th November with results being announced on the 13th.  As well as the nine members representing Constituency Labour Parties (CLPs) members will also be able to vote for the position of Treasurer, whilst members under the age of 27 will be able to vote for the Youth Member Representative, and for the first time disabled members will be voting for their own representative too. The NEC is the governing body of the Labour Party, overseeing the overall direction of the party and the policy-making process. It sets strategic objectives on an annual basis and meets regularly to review the work of the party.  The successful candidates will work alongside Keir Starmer and Angela Rayner, helping to make sure the Party is in the best shape to win the 2024 General Election.

END_OF_DOCUMENT_TOKEN_TO_BE_REPLACED

The GMC of the Bridgwater and West Somerset Constituency Labour Party met on Zoom last night to vote for the constituencies nominations for the NEC elections.

Being a ‘delegate’ based GMC, 17 elected delegates from across the constituency were entitled to vote.

10 attended, proposed and seconded from a panel of candidates available here and then voted (in secret) via the Labour Partys ‘Choice Voting’ on-line system.

The meeting was Chaired by Gary Tucker and the voting system operated by Secretary Brian Smedley who has since been taken out and shot.

Results were as per the table and the gallery.

Despite the temptation of going out to enjoy the sunshine, members turned up on Zoom this afternoon to take part in a new-style meeting consisting of ‘breakout rooms’ in order to discuss the findings of the Labour Together Report on the General Election.  Members from across the constituency turned out to have their say on the report’s findings and suggested some possible changes we could make locally from the 43 recommendations of the report.

END_OF_DOCUMENT_TOKEN_TO_BE_REPLACED

Just before lockdown Somerset Labour planned to hold a public meeting to discuss a common approach the the proposed ‘unitary’ reorganisation that was causing ructions within the local Tory party as County Tories urged a County solution and District Tories urged a district solution. Labour is not strong in Somerset but it does  control BridgwaterTown Council and is the main opposition Party on Sedgemoor District Council. So it’s time again for us to enter the fray on the subject of unitaries. This week County Tory leader David Fothergill has reignited the debate-to the annoyance of District Tories. Somerset Labour will host a ZOOM discussion on the subject of Unitary options on Friday 12th June at 10am. The meeting will be hosted by county Labour Leader Leigh Redman and Leader of Bridgwater Town Council, Brian Smedley. If you are a Labour Party member and would like a zoom link to join the meeting please email us somersetlabour@gmail.com.

END_OF_DOCUMENT_TOKEN_TO_BE_REPLACED

This section of the website has been set up by Bridgwater Branch Labour Party. Here you will find news stories, reports and summaries of meetings

In the spirit of openness this section is accessible to everyone, members, supporters and non-members alike.